In 1984 the Medway Queen was brought back from the Isle of Wight to the Medway area by a group of local businessmen, headed by Jim Ashton, who intended to restore  her. They planned to berth her in the Dockyard at Chatham, recently vacated by the Royal Navy. The ship came amidst much pomp and glory; the Mayor was on board for the last few miles of her journey up river; the press wrote joyously that she had "come home". Great! We all though, the lovely old ship will be restored. A year later she lay in the river, off the Dockyard wall, buffeted by tides and the wash of passing vessels, almost completely submerged at high water, weeds grew on her decks and fish swam through her lower saloons. A sad sight indeed. Her owners had gone quiet, nobody knew what her fate might be.

It was Marshall Vine who started the whole thing off. He was seeking people who might be interested in trying to save the ship which lay on the mud not far away at St Mary's Wharf. Soon informal meetings with many other interested people took place, including Bob Barnes who has remained Treasurer of the MQPS since those early days. Our first meetings were held in the Victorian Brook Pumping Station in Chatham. As the only woman present I was determined not to make the tea. We talked about various ways we could publicise the project. It was suggested that we approach the manager of the popular shopping complex at Hempstead Valley on the outer reaches of Gillingham, with a view to having a small display stand there and asking interested parties to attend a public meeting and join our efforts to save the Medway Queen.

My first task for the new project was to see the general manager at Hempstead Valley, the late Dick Allard, he was most helpful and remained a supporter for many years afterwards. Help and support from local business men like Dick Allard was a very important factor in those early days. Mike Peevers produced a few very large photographs of the ship and we borrowed some display boards. Over the years we became experts at borrowing! I dressed in nautical colours and bravely stood around for several days talking to members of the public. The centre stayed open late in the evenings so a team of volunteers was organised to cover that. We had met with the then owners of the ship and agreed to form a Society to save her and we were confident that the local people would support our aims. A public meeting was held on 13th June 1985 at the Corn Exchange in Rochester. Our first few members enrolled that evening. The local press covered the event and we felt greatly encouraged.

Before long work parties had been established to start clearing the ship of the tons of accumulated silt. Every weekend our volunteers came from far and wide to shovel mud or scrape off weed, rust and old paint. We also needed to publicise our Society, apply for Charity status, sell souvenirs to raise funds, find a safe berth for the ship and generally seek professional advice on all aspects of caring for an old ship. the project gathered momentum and mebership grew. Our story was told in papers and journals all over Britain and indeed all over the world. It was all very exciting and became a steep learning curve. Most of us knew little about about old ships nor about running a public campaign, we felt the eyes of ship lovers everywhere upon our efforts. We could not afford to fail!!. 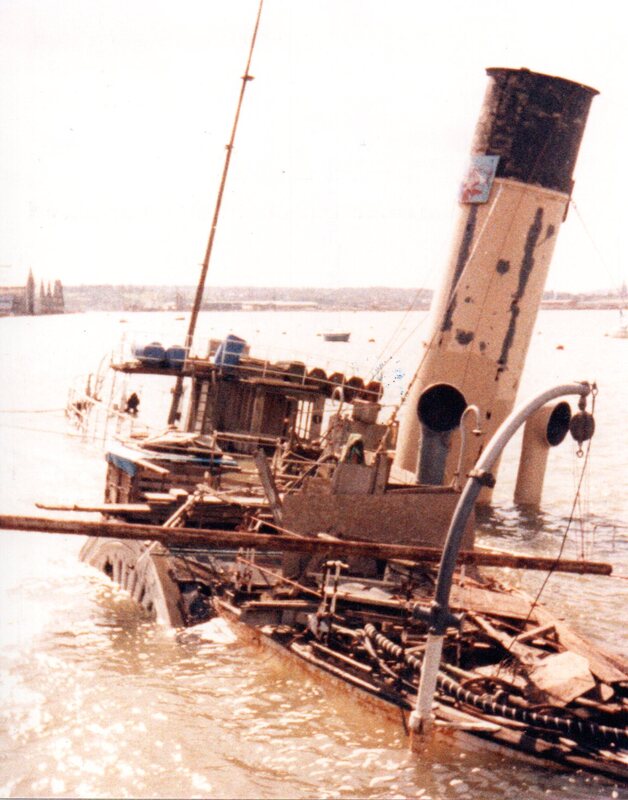 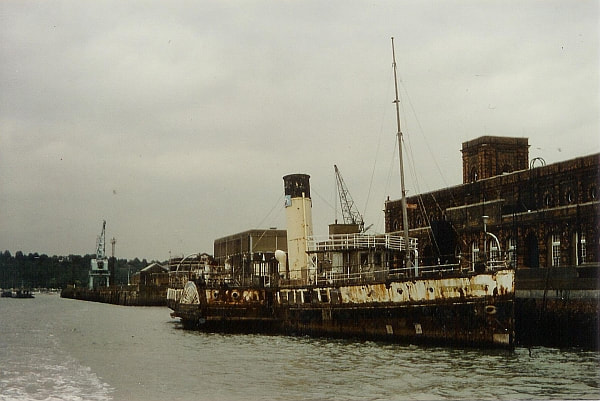 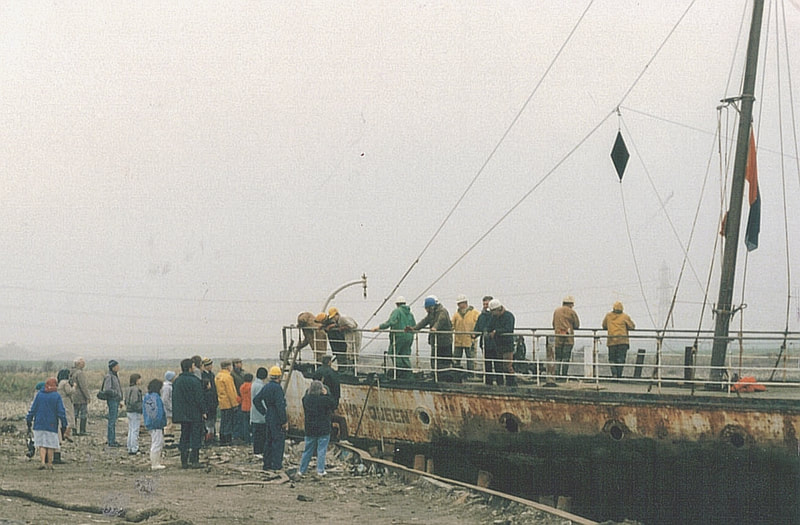 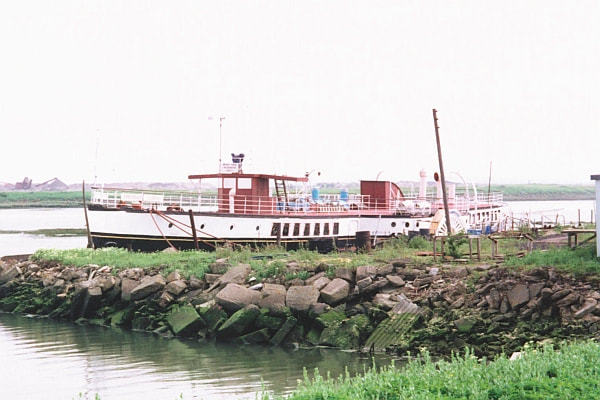 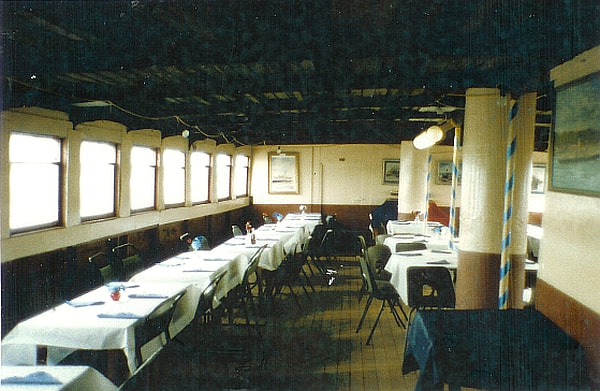 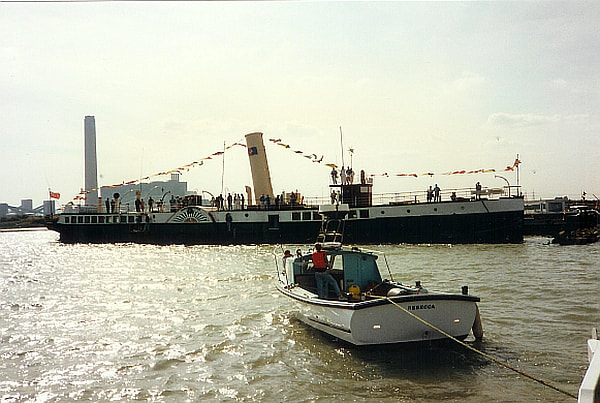 Above: Early days gallery. With thanks to Marshall Vine, Iris Painter, Mr. Newcombe, PSPS, Barry Finch and Gill Ellen.
​
We lobbied councils and MPs, contacted celebrities and other societies. Gave countless talks and slide shows, took the sales stand all over the South East and beyond, participated in very many radio and TV programmes, drove countless miles and ran up enormous phone bills, in retrospect we must have been a thorough nuisance to many people. But we were determined to save our ship and nothing was going to stop us.  Although hard work, those early days were most enjoyable. We had a clear mission, to save the Medway Queen, having bought her from liquidators of the previous owners. With the help of P&O we were able to revive the New Medway Steam Packet Company to hold legal title to the ship once again and I was delighted to become one of the directors.

Finding a safe berth for the ship was not so easy. It had become very clear that the management of the Historic dockyard at that time wished to be rid of us and our ship, the resulting coverage in the papers was fascinating to say the least. We searched the banks of the Medway and Thames and their estuaries, every creek, old dock and wharf. Offers from other towns came in but she is the queen of the Medway and we rally did not want to let her go too far afield. I have memories of Marshall and colleagues rowing around a creek in Strood taking soundings and counting how many shopping trolleys would have to be removed. We asked Gillingham Council if we could use an old and long disued dock in Lower Rainham, but they said out work would disturb the birds. Old wharves in Gravesend were investigated, a local Councillor in that town offered the canal basin, but it's entrance was too narrow for our ship.

Then a saviour appeared on the scene, Gill Ellen approached David Dunwell who managed a large site at Kingsnorth. He said we could tie up alongside his wharf for a while. this "while" was to stretch to twenty years. We the had to float the ship, satisfy the river authorities that she was safe to tow the eight or so miles to Kingsnorth, obtain insurance for the trip, notify the press, radio, television and sail off into a new chapter of the ship's history. During the following twenty years our Society changed and grew. From the first few enthusiasts our numbers grew around one thousand. We became a registered Charity. We built up a good rapport with the media at local and national level. Local authorities took notice of us, visitors came from far and wide. We spent much time and tears over bids to the Lottery for funding, finally achieving success in 2006. From humble beginnings our hobby had now become a million pound project, and had become big business.

The twenty years at Damhead Creek, Kingsnorth, is well documented so I will end my reminiscing here as the hull of the ship is about to be rebuilt and whole new story begins.

Written by Noreen Chambers, Vice-President of the MQPS. November 2008.
back to history page