In the seasons of 1952 and ’53 Dawn Fenwick (now Mrs. Dawn Mattocks) worked on board Medway Queen in the restaurant. She tells us that "Mrs.Osborn was the Catering Manageress and her responsibilities included the bars and ice cream kiosk. We served mainly sandwiches and snacks plus the usual beverages. I also had to help out in the ice cream kiosk as and when required. The saloon had to be kept clean at all times, Clearing the tables after passengers had vacated was a number one requirement, leaving a “sticky” table was a cardinal sin.  Limited hot meals were prepared in the galley and served in the saloon. Meat was still on ration, until July 1954, but the traditional “Plaice & Chips” was available for those passengers that could afford it. They were austere days and money was in short supply for the average family so a day on a Medway steamer was a big day out! "

George Painter also remembers a non-landing evening cruise to Southend and back in 1952  He was accompanied by his future wife Iris and remembers a “plaice and chips” supper in the forward saloon and later Iris feeling a little “woozy” but not sea sick. There was always a bit of a sway on the Medway Queen, even in  calm waters, sometimes the captain requested passengers to move to either side of the ship to maintain a balance! 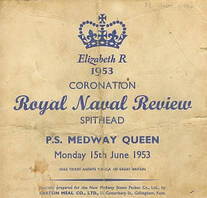 Spithead Review: Brian Goodhew worked on board in 1953 and remembered the ship's excursion to the Coronation Naval Review at Spithead. Medway Queen’s allotted position was in row “L” just off Ryde Pier.  This was not a “front stalls” position by any means but still very much part of the event. The sometimes distant view of proceedings was supplemented by listening to the commentary provided via the BBC “Home Service”. After a cruise around the assembled fleet the ship anchored in her allotted position and with the bar open and a packed lunch included in the price her passengers settled down to wait for the official proceedings to begin.  Apparently the packed lunch made a poor impression on some people. A cardboard box (left) with a sandwich, apple and biscuit inside was less than some had expected for 12 guineas!

​​The firework display was scheduled for 10.40pm with the illuminations turned off at midnight.  During the intervals between these activities there was plenty of time for more food (although supplies ran out before the end of the afternoon) and to spend money in the ship’s bars.  This opportunity was exploited to the full by some of the passengers who had to be carried off the ship at the end of the day. 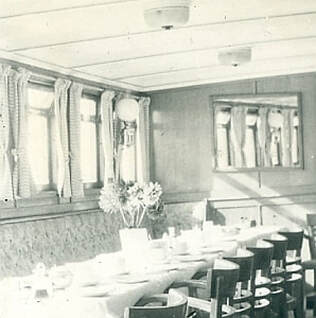 Menu Variations:
Richard Lingham travelled on board in the '50s. He recalled that many passengers would eat their own packed lunches on deck, or in the lower saloon aft, having purchased drinks at the tea bar, Acorn Bar or kiosk. A fortunate minority could afford morning coffee and biscuits, lunch or high tea in the dining saloon, served by waitresses who steered a circuitous path with heavily laden trays between the saloon and the galley which was located forward of the engine room. It was a sheer marvel that the cook, assisted by one galley-boy could deliver so many tasty meals to passengers and the crew from such a narrow space, equipped only with a 1920s cast-iron cooking range. For lighter appetites, crisps, ice- creams and soft drinks were available all day from the kiosk, whilst the tea bar served hot drinks, sandwiches, meat pies, biscuits and cakes.

Brian Goodhew records that his day on the PS Medway Queen as galley boy in 1953 started by reporting aboard for 07:00, to the galley where the cook was working away cooking breakfast for the crew, filling the ship with the aroma of eggs, bacon and sausages. If the cook was a little late I used to lay out the strips of bacon on large enamel trays and slide them into the oven. By 07:15 we were serving breakfast to the crew who were queueing at the port side of the galley while the waitresses waited at the starboard side for orders for the saloon, which included Captain Horsham and the officers. 07:30 always seemed to be the time that swans would gather by the rear of the port sponson for scraps from the breakfast plates. At 07:45 he would go ashore and cycle to the butcher’s shop to pick up the meat for the day – usually a joint of beef.

​Both recalled the popularity of the ship's bars, the opening hours of which were not controlled by 1950s licensing laws when the ship was at sea. Brian also recalled hurried trips ashore at Southend to obtain fresh crabs for the restaurant or for the officers' meals.
Extracts from "The Medway Queen", 2013,2014,2020, and "Life on Board", 2021. Both published by the Medway Queen Preservation Society.