From 1966 Medway Queen was used as a marina clubhouse and nightclub at Island Harbour on the Isle of Wight. The club opened for business on Saturday 14th May of that year and annual membership was 3 guineas (£3.15) for one person or 4 guineas (£4.20) for a married couple. Temporary membership, presumably aimed at holiday makers, was 5 shillings (25p) per week.The club made full use of the ship’s 4 saloons with a restaurant, music and dancing including live music and discos, casino and a meeting/function room. It must have been a very successful place as it is fondly remembered by very many people some 50 years on. The live bands included the “Steamboat” blue grass group and the late Richard Manuel of Bob Dylan’s backing group visited from the music festival and sat in with the resident musicians Doug Watson and Ernie Hayles. Regular visitors remember that dancing became “more of a challenge” when the tide went out and the ship settled on the mud, heeling gently to one side!

The proprietors, Alan and Colin Ridett, produced a selection of promotional material, examples of which have survived. There are many photographs of the ship at that time and even some interior shots. The society would be interested to hear from anyone who remembers the club and especially copies of any photographs taken below decks. The interior of the ship at that time is well illustrated by two of the postcards published by J. Arthur Dixon of Newport. There were 4 cards in all, the other two showing the ship’s exterior. the club featured in a BBC programme in 1967 and the society is fortunate to have a copy which can be shown on board and in the Visitor Centre.In due course the business outgrew the ship’s accommodation and a larger vessel was purchased. This was the PS Ryde from the Portsmouth – Ryde ferry service. Another paddler, but significantly newer and larger. The two ships operated alongside one another at first but eventually, in 1974, Medway Queen fell out of use and the business concentrated on Ryde Queen.

In 1978 a trio of Kent business men, led by Jim Ashton with Eddie Dunlop and Lionel Lovesey purchased the ship. They spent much time and money patching her up for a move and restoration attempt. Among other methods, the inside of the hull was sprayed with concrete to strengthen and seal it but there was a particularly troublesome leak at the bow that could not be accessed because of a built in freezer installed for the restaurant. Jim and his colleagues negotiated permission to breach the marina wall into the river and move Medway Queen out. This was accomplished but the bow leak caused the ship to sink and a further hole was made – this time below the boiler and equally inaccessible. On Friday June 20th 1980 the Isle of Wight Weekly Post published a sad picture of the ship and a gloomy forecast of the future. The project was plagued by continuing deterioration of the ship and repeated theft of fittings and equipment but they eventually managed to re-float Medway Queen at considerable cost in time and money and in 1984 she was moved down to Cowes at the river’s mouth. There she was placed on a submersible salvage barge and towed back to Chatham in Kent. Medway Queen was moored just outside the naval dockyard and kept afloat by continuous pumping. Jim Ashton formed the Medway Queen Trust Ltd to give the team a measure of financial protection and the Medway Queen Preservation Society was formed to support the Trust. Work continued on mud removal and hull patching with yet more concrete but this attempt at saving the ship eventually failed through lack of funds and after lengthy legal and financial negotiations with the Official Receiver the Preservation Society purchased the ship and began looking for a new home for her. 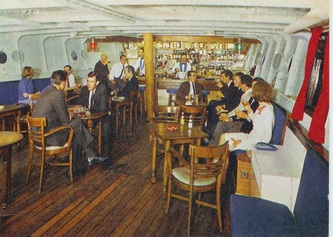 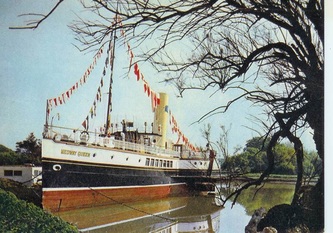 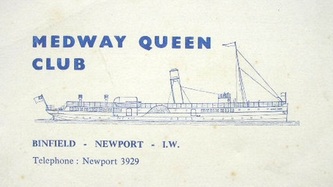 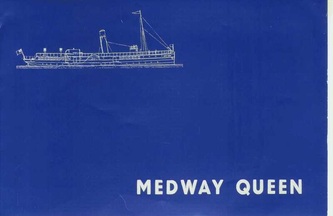 back to history page