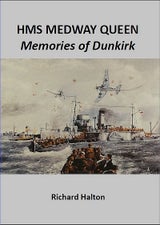 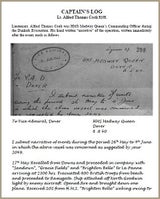 The book is roughly A5 size, 76 pages, with a cover price of £8. It mostly contains personal recollections by those who were there. We are fortunate that no less than 3 members of the crew were taking photographs at that time. The First Lieutenant took some, which we have courtesy of the PSPS Collection. Two others, Eric Woodroffe and Roger Matthews, gave their material to the Medway Queen Preservation Society many years ago. Included in the book are the captain’s “narrative log” sent to the admiralty, extracts from a diary kept by one of the crew and accounts by Thomas Russell (ship’s cook) and John Graves (1st Lieutenant) printed in full.

Personal recollections from other crew members and the troops who were evacuated by HMS Medway Queen give the further detail to the story. We have a Foreword written by the grandson of the captain at Dunkirk and numerous accounts and information contributed by the descendants of both crew and troops.